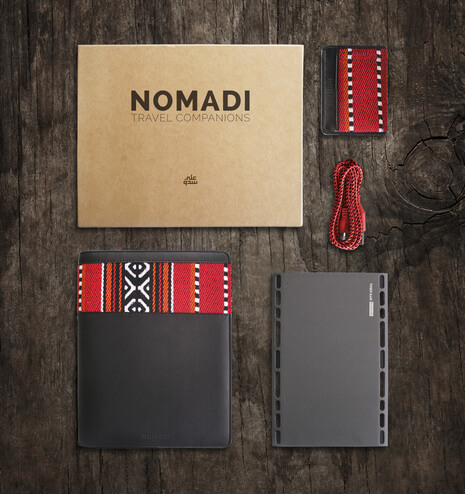 SOCIAL RESPONSIBILITY: HOW CAN WE MAKE A DIFFERENCE?

Jotting down your most important thoughts and inspirations by hand has never been more avant-garde. Get style, tradition, and convenience all in one (highly portable) package with Nomadi.

Every once in a while, a new invention comes along that is such a stroke of genius—such a bold move toward simplification—that you wonder why you didn’t think of it first. That’s the definitely case with Nomadi, the world’s first mobile-charging journal. It pairs a powerful, super-slim 8,000 mAh power bank with an A5 Filofax journal. Nomadi gives you 100 blank (and easily refillable) sheets of paper, a yearly diary, four card slots, a passport holder, a pen loop, two USB ports, and a three-in-one charging cable compatible with iOS and Android devices—all packaged in a strikingly beautiful Bedouin textile journal cover.

Nomadi sought to design a product that would fit perfectly into modern Gulf society, where old and new have converged and continue to evolve together. With the Bedouin sadu textile providing a window to ancient cultural tradition, Nomadi has formulated the perfect contemporary notebook to maintain a sense of heritage while offering cutting-edge design. Nomadi symbolizes both pride in tradition and awareness of the future. “Incorporating a power bank,” says Nomadi’s Nabeel Arshad, “is the icing on the cake.” And it’s a powerful one—up to three times your phone’s charging capacity.

CROWDFUNDING, A NEW WAY TO RAISE MONEY TO FUND SPECIFIC GOALS, GATHERS CONTRIBUTIONS OF ANY SIZE FROM INDIVIDUALS WHO BELIEVE IN THE PRODUCT (AND OFTEN RECEIVE “PERKS,” OR REWARDS, IN RETURN).

Nomadi’s goal is to take the Middle Eastern sadu textile globally. After studying the retail fashion success of prints derived from Native American tribal tradition throughout the U.S. and the world, Nomadi hopes to do the same with traditional Arabic textiles. Because of their inherent richness of color, design, and diversity, Nomadi firmly believes in their potential to gain a similar popularity.

In order to get their project off the ground, Nomadi has created a crowdfunding campaign on Indiegogo. Crowdfunding, a new way to raise money to fund specific goals, gathers contributions of any size from individuals who believe in the product (and often receive “perks,” or rewards, in return). Crowdfunding has emerged as a proven means of reducing overall financial risk, and can entirely replace traditional investment in the case of an unproven product or idea that the world may not yet be aware of or responsive to. Crowdfunding opens one’s market—not just within Bahrain or the GCC, but to everyone in the world with an Internet connection.

Crowdfunding helps individuals and new companies determine whether or not an idea will be well-perceived by the public. Of course, if the campaign is successful, the company will receive the funding it needs to begin making that idea a reality. As a business model, crowdfunding is built upon transparency of conduct as well as a solid foundation of personal responsibility.

Here’s how you can enhance your employee engagement & wellbeing, especially during the pandemic.

CROWDFUNDING HELPS INDIVIDUALS AND NEW COMPANIES DETERMINE WHETHER OR NOT AN IDEA WILL BE WELL-PERCEIVED BY THE PUBLIC.

Arshad says, “Crowdfunding forces you to see the world through a different lens. That is why we’ve decided to dedicate a percentage of sales, through the U.N. Refugee Relief Fund, to the millions of refugees who will be struggling this winter.”

What’s Nomadi’s crowdfunding advice for aspiring entrepreneurs? “Start small and dream big. If you really have a great idea, people will follow you, and invest their time and resources. Take on your project with people who share the same vision and have taken ownership of it.”