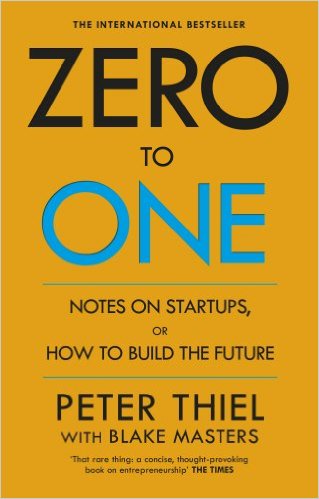 The book “Zero to One: Notes on Startups, or How to Build The Future” is written by Peter Thiel. In this book Thiel provides a philosophical and strategical perspective on how entrepreneurs can make their startups successful through the lessons he learned from founding and selling Paypal, investing in Facebook and becoming a billionaire in the process.

His book is divided into 15 chapters, where each chapter touches upon a topic that’s important and useful for startups. We decided to put together some of the best lessons learnt from this book:

According to him this question is challenging because respondents have to reflect and talk about knowledge that they’ve created from themselves (and not taught from anywhere else), and to become socially unpopular by choosing a difference stance. He believes that innovation is important and that startups are the ones who can produce that.

2. Competition is for losers – “If you can regonize competition as a destructive force instead of a sign of value, you’re already more sane than most”

This may sound surprising to you, but Peter here actually justifies monopoly, and he gives an example for that: Google has a monopoly on search but actually emphasizes the share of global online advertising while US airlines serve millions and millions of passengers and create hundreds of billions of dollars of value every year, but only make 37 cents per passenger trip.

Since everything is changing rapidly, and new things are invented every second, creative monopolists give customers a variety of choices by introducing them to newer categories. It’s true that Microsoft has a huge monopoly in operating systems, but at the same time Apple’s iOS and Google’s Android emerged and overtook the previous operation systems.

3. Importance of Vision: Did you know that Peter Thiel and his 50 members of the Paypal team spent years until they can finally became successful and be called the number one payment processor that’s used by ebay customer? But what kept them going? Yep, it’s the vision. Think outside the box, be creative, and focus on that vision of yours. Even if it’s weird, it can happen once you have that determination and courage pumping through your veins. Fifty years ago who would have known that you’ll be able to scroll down your screen using your fingers?

The book Zero to One is definitely your book if you are new to the startup scene. Are you starting off but lack the support of your friends and family? Don’t have the motivation or the encouragement to keep going? Thinking of quitting soon? Then Peter Theil is definitely your guy.

This book is available through Amazon and the Book Depository for BD5.