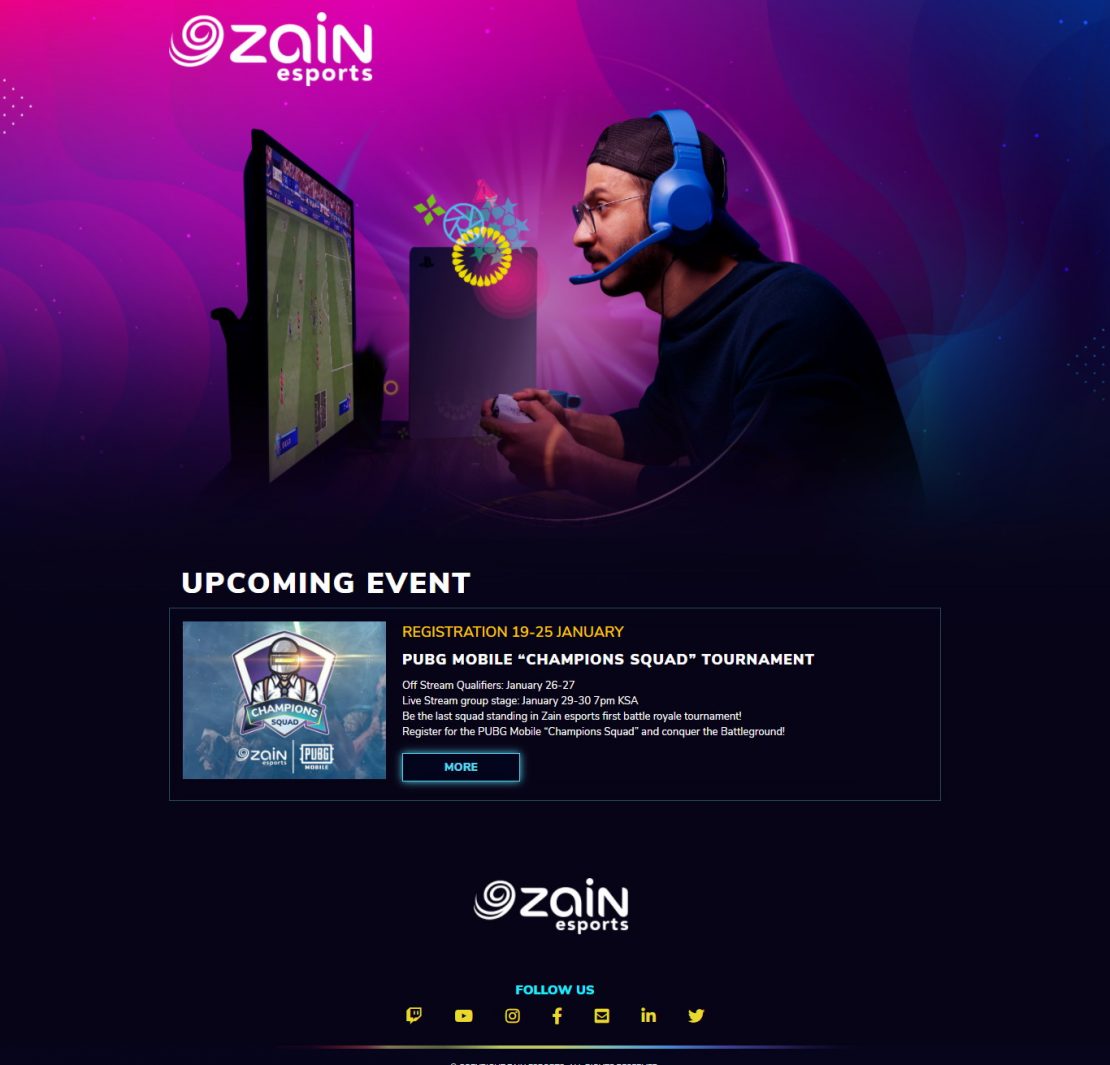 Check out these MENA startups disrupting different industries in the region

Kuwait, Riyadh, Amman, Manama –January 26, 2021Following its recent entry into esports and gaming, and the completion of the FIFA 21 in December 2020, Zain Group, a leading telecom innovator in seven markets across the Middle East and Africa, announces its next esports tournament “Champions Squad”, a Tencent approved PUBGM community event.

One of the world’s most popular games, PUBG Mobile is an officially authorized combat and survival mobile game entertaining millions of gamers from all age groups.

A social media campaign has been launched inviting PUBG Mobile gaming teams from across the MENA region to register on zainesports.com and qualify for the group stages. The qualifying rounds will be held 26 and 27 January that will determine the 24 qualified teams that will go on to play the 8 invited teams in the semi-finals and finals that will be held and livestreamed on Zain esports YouTube channel on 29 and 30 January as well as 5 and 6 February (7pm KSA)

Zain esports has signed up popular PUBG Mobile gaming influencers (Bayati and Rico) to promote and play in the competition as well as be the special guests on Zain esports Twitch channel Monday night show that was broadcasted on 25th January and will also be held on 1st and 8th February (8pm KSA).

Commenting on the upcoming Zain esports competition, Malek Hammoud, Zain Group Chief Investment and Digital Transformation Officer said, “PUBG Mobile is a phenomenal partnership fit for Zain as it is one of the fastest growing and most popular gaming events across the region. We are keen on filling the void of what the regional gaming community wants and are excited by the many upcoming community esports tournaments we plan to hold in 2021.”

Hammoud continued, “This gaming manifestation of Zain’s digital lifestyle strategy is geared towards empowering society and driving socio-economic development by creating multiple opportunities for young people right across the Middle East. Regional amateur and professional gamers will also have the opportunity to win various prizes in a fair and competitive environment.”

Zain esports plans to identify and foster local talent in numerous ways, including by creating a competition to select casters, analysts and commentators for Arabic commentary, as well as creating a conducive environment for esports content creators aiming to create popular influencers.

Zain Group aims to ensure that all its esports tournaments must be held in accordance with UNICEF’s guidelines to ensure Child Online Safety and prevent cyberbullying, hence creating a safe space for all interactions between the players.

Moreover, Zain esports will support and use local social media influencers to promote leagues among local gamers.  Zain esports also plans to create an incubator creating opportunities for aspiring coders and producers to contribute technically to the Zain esports initiative on an ongoing basis.