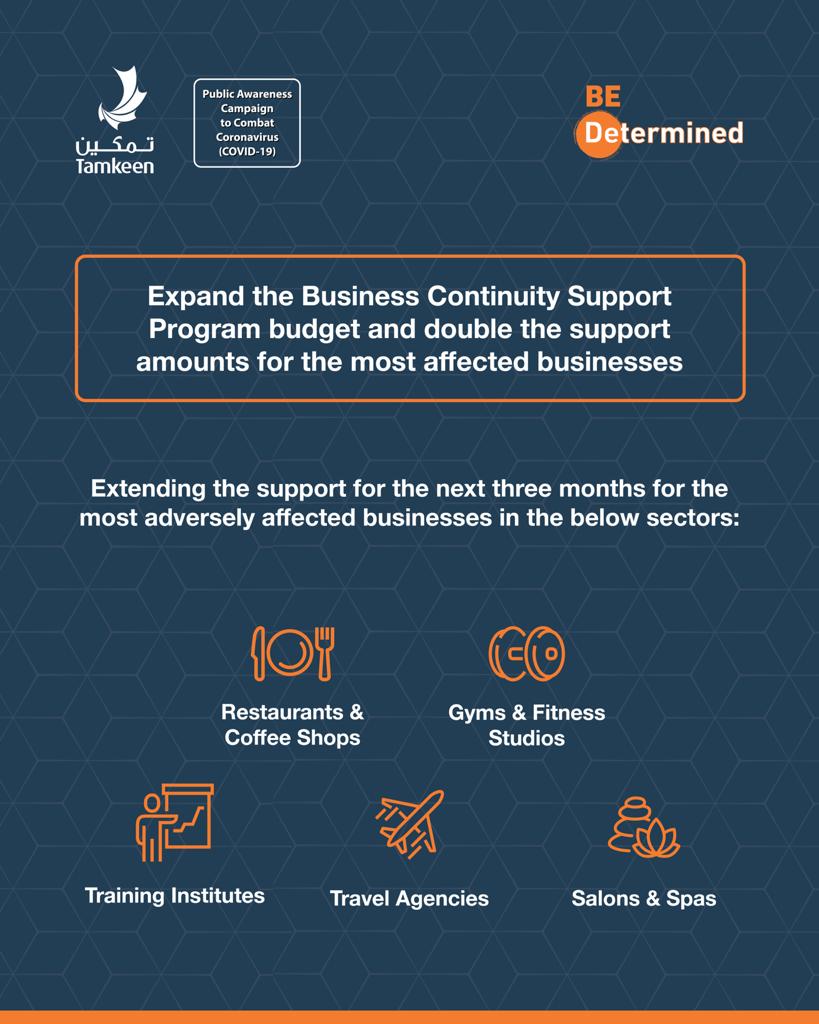 A Global-First from Egypt: Uber Launches its Intercity Bus Service

The Chairman of the Labour Fund ‘Tamkeen’, HE Shaikh Mohammed bin Essa Al Khalifa, held a meeting with Tamkeen’s Board of Directors, and Chief Executive, Dr. Ebrahim Mohammed Janahi, remotely, to discuss the labour fund’s strategic initiatives to minimize the impact of the repercussions presented by the coronavirus (COVID-19) on the economy.

During the meeting, HE Shaikh Mohammed announced an increase in the budget of Tamkeen’s Business Continuity Support program as an ongoing incentive which underscores Tamkeen’s commitment to continue providing support to the economic sectors most adversely affected by the global pandemic.

The step taken by Tamkeen is in line with the Royal Directives of HM King Hamad bin Isa Al Khalifa, to unite national efforts in confronting the repercussions presented by the global spread of the COVID-19 and providing the necessary support to the Kingdom’s citizens and private sector, and follows the decisions made by the government, led by the Prime Minister, HRH Prince Khalifa bin Salman Al Khalifa, and the directives issued by HRH Prince Salman bin Hamad Al Khalifa, the Crown Prince, Deputy Supreme Commander and First Deputy Prime Minister on this matter.

HE highlighted that the financial support provided to enterprises operating in most adversely affected economic sectors will be doubled and extended for another three months. The sectors include sport clubs, gymnasiums, beauty salons, restaurants and cafes, training institutes, travel and tourism offices.

For his part, Tamkeen’s Chief Executive Dr. Ebrahim Mohammed Janahi noted that the financial support will be provided to enterprises most adversely affected by the global pandemic, whose applications have already been accepted within the first phase. Janahi further noted that Tamkeen will review and take into consideration previous requests made by enterprises that were not covered by the support during the first phase, with the financial grants to be disbursed retroactively for the past three months, as of next week.

The first phase of Tamkeen’s Business Continuity Support program was reviewed by the board, in which financial support was provided to more than 15,600 SMEs, including taxicab drivers, public transport and bus drivers, driving instructors and kindergarten and nursery workers, benefiting more than 900 individuals to date.

The Supreme Council for Environment signs MoU with Tamkeen

The meeting also covered details on the total amount of financial support disbursed to date within the program. The Board Members emphasized the importance of the support program for these sectors in order to sustain businesses and operations during the current situation.

The support opportunities offered within the framework of the program include the provision of financial grants according to the size of each enterprise, in proportion to the objectives of covering part of the basic operating costs of these institutions.