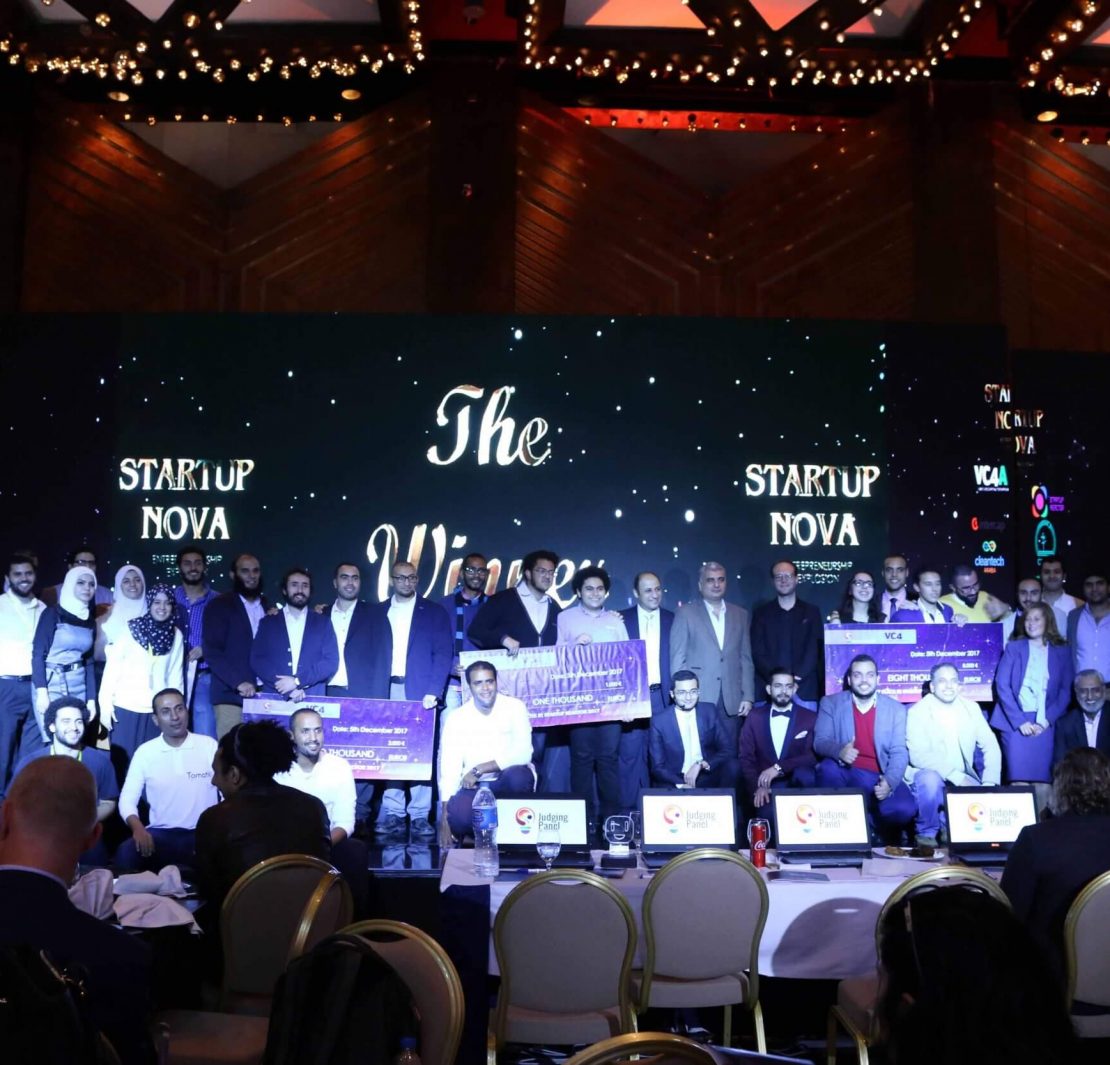 On the 5th of December, Innoventures held “Startup Nova – Entrepreneurship Explosion” at the prestigious Hilton Ramses, as the final phase of its Startup Reactor program’s fourth cycle. Cash prizes of 15,000 Euro total were given to four promising startups by VC4A, the program’s partner, and main sponsor. Innoventures also announced an upcoming 100 million EGP fund for startup ventures based in Egypt.

First place prize went to Happiana, a startup that specializes in creating adaptable charging solutions that can charge any device, anywhere at anytime, with a goal of erasing the words “Battery Low” from existence. Their work secured them a 8,000 Euro cash prize. The second place prize, 4,000 Euro, went to Bioniclimbs, a research and development based company for developing prosthetic limbs with a focus on high functionality, fast production and customization. The third place prize, 2,000 Euro, went to Agrona, a startup that offers new technology in chipboard manufacturing that is distinguished by by its low prize and wide range of applications in industrial and furniture usages. Finally, the popular vote prize went to the night’s crowd favorite, Imaginators, an online platform that helps people create interactive, customizable, presentations just by dragging & dropping components, using a range of built-in tools. They secured a 1,000 Euro cash prize.

Hesham Wahby, CEO, delivered a welcome speech in which he introduced the Startup Reactor program. The welcome speech was followed by a keynote speech by Shehab El-Nawawi, CEO and Chairman of Giza Systems, in which he encouraged young entrepreneurs to build on their ideas and to not be afraid of failure, as it is a crucial step to success “In order to succeed, you have to possess a focused mindset, capable of learning from failure.” He emphasized the importance of persistence and pushing to get out of their comfort zone and follow their passion regardless of the surrounding culture pressures.

Ben White, Founder and CEO of VC4A, expressed his pleasure in cooperating with Innoventures in supporting entrepreneurship, and proclaiming Startup Nova as a celebration of the strength of the entrepreneurship community in Egypt. He also added that Egyptian entrepreneurs have a wide host of exceptional skills and capabilities.

Muhammed Mansour, Business Development Manager at the Planet, spoke on behalf of Juicelabs and spoke about Juicelabs’ partnership with Innoventures throughout the fourth cycle of Startup Reactor, in the media track. Ghada Moghny, Programme Coordinator at CEDARE, delivered a short speech on cooperating with CEDARE on this cycle’s e-waste track.

Yara Yehia, one of the co-founders of Tripdizer, spoke about her experience in the third cycle of Startup Reactor’s program, as one of the winners in last year’s Startup Nova, highlighting the journey she had undergone with Innoventures in Startup Reactor. Noha Fathi, marketing and management consultant, spoke on behalf of the Innoventures’ mentorship program, stating that the ten startups have received over 360 hours of mentorship throughout the Plasma phase of the Startup Reactor.

The participating startups were:

Agrona: Offering new technology in chipboard manufacturing which is distinguished by its low price and wide range of applications in industrial and furniture usages.

TechnoRecycle: Active in the field of collection, dismantling and refurbishment of E-waste. They apply safe and environmentally friendly technologies to recover valuable materials from end-of-life electrical and electronic devices.

Bioniclimbs: A Research and Development based company for developing affordable, prosthetic limbs with a focus on high functionality, fast production and, customization.

Imaginators: An online platform that helps people create interactive presentations just by dragging & dropping components. Users can customize the design & layout of their presentations along with the addition of animations & interactions from a range of built-in tools.

Nezaker: An interactive platform for parents that assists them on improving the life of their children and enabling them to make the right life decisions, using short 3-10 minute videos prepared by professionals.

Ekacia: Ekacia’s goal is to establish a new culture in the community that promotes donating old electronics and home appliances through a mobile app that formulates the point of direct communication between its users and local charities.

Okhtub: Okhtub is an intelligent, serious matchmaking platform for the purpose of marriage. Okhtub’s mission is to connect soulmates based on accurate matchmaking that relies on character, culture and behavior.

Happiana: The first and only company in Egypt to design and manufacture adaptable charging solutions that can charge any device anytime anywhere.

Prior to the winners’ announcement, Munaf Emam, COO, introduced Innoventures’ future partnerships and plans. A design track for the fifth cycle of Startup Reactor was announced in partnership with 49 Studios, led by Ashraf Tawakol, CEO of Taya IT and Founder of 49 Studios. A computing track was announced in partnership with IBM, led by Myrna Fahim, MEA DevEx Leader – Egypt, Pakistan & Morocco. Finally, Rafik Dalala, Investment Committee member at Innoventures and Managing Director of Intercap, expressed that the presence of local and international investors at the event is the most integral part of the event to fulfil Innoventures’ goal in helping startups to obtain funding for their businesses. Rafik also announced Innoventures and Intercap’s partnership in securing the 100 million EGP fund for Egyptian startups.