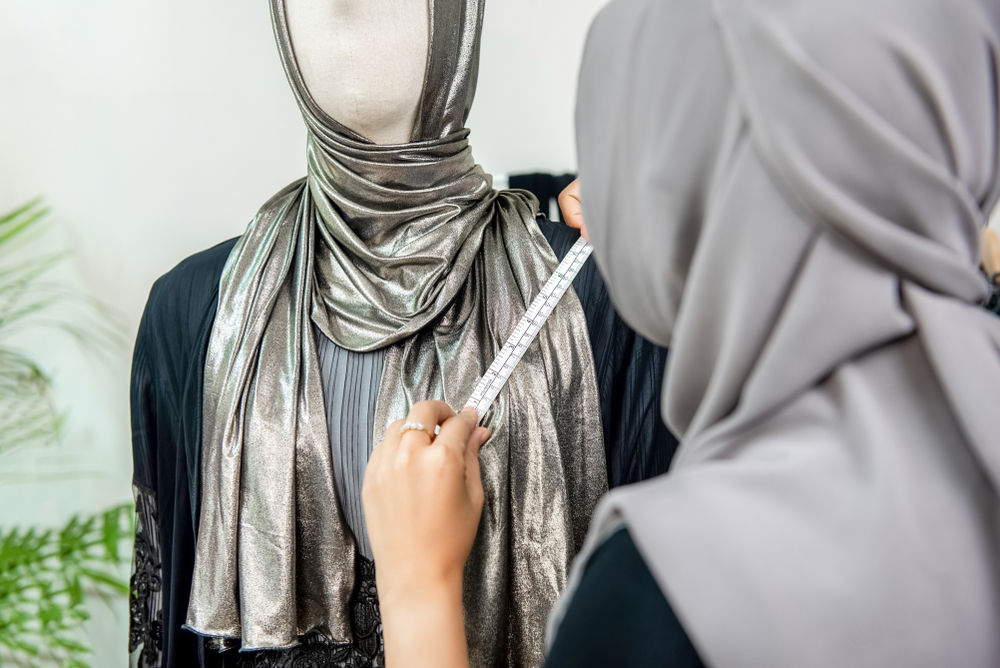 Lulwa Salem, a graduate of the Delmon Star program run by Bahrain Fashion Incubator (BFI) has designed a smart Abaya.

Her invention works to protect the woman wearing it from the danger of exposure to high heat and alert her about health hazards that can occur during a physical activity such as exercising and hiking.

Lulwa used a special fabric to reduce the heat by about ten degrees from the external temperature to make wearing it more comfortable and to also prevent dehydration, as with high temperatures the body loses a large amount of water which disrupts its vital functions. Lulwa added a fitness tracker in the abaya to track the heart rate and collect daily activity data such as the number of steps and calories burned. She used a reflective fabric in some areas to make walking at night safer and avoid potential car accidents. This design was inspired by Bahrain’s heritage related to the textile industry, especially the “Sado” which can be seen in the shape of the triangles on the side. The fabric is also characterised by its ability to prevent sticking to the body when sweating. In developing it further, Lulwa is planning to use an antibacterial fabric as environmentally friendly alternative which is in line with not only the global direction in sustainability but also the direction  of the Kingdom of Bahrain in recent years. The antibacterial fabric reduces the need to wash the Abaya and thus reduces the consumption of water.

Commenting on the specifications of the Abaya, Lulwa Salem said: “As a Khaliji woman, I love wearing Abaya all the time and I often feel the need to develop it to suit the region’s hot climate. Abaya can feel uncomfortable for women who like to walk outdoors or women who work in environments that are exposed to sun or heat. I envision extending the application of this idea to serve different individuals in the society of different tastes in fashion including men and children using the same safety features in their garments. My approach in all my designs will always be centered around the use of modern technology inline with the global direction of the fashion industry.”

Lulwa Salem, a creative Bahraini fashion designer, won first place in the Dilmun Star competition held last April with the support of Tamkeen and under the patronage of Zayed bin Rashid Al Zayani, Minister of Industry, Commerce and Tourism. She started her journey in fashion design 15 years ago sketching designs of clothes she could not find in the market, then she obtained a Diploma in Fashion Design and joined the Delmon Star program last year. Through the program, she had an integrated experience in fashion design and entrepreneurship. She was inspired by the idea of applying technology to the Abaya during the Fabric Technology workshop presented in the early stages of the Dilmun Star program and worked on developing her ideas with Mrs. Jalila Aarab, founder and CEO of the Bahrain Fashion Incubator during and after the program. Lulwa then decided to be specialized in designing clothes with technological specifications that provide solutions to some health and safety problems facing not only Khaliji women but all segments of our society.

Jalila Aarab, said: “We are very proud of Lulwa for creating a unique piece that represents a beginning to a new area in the fashion field. BFI is one of the first organizations in the Middle East and North Africa to provide the right environment and support that encourages fashion startups in using technology. We are working on creating a thriving ecological system for the field of fashion, and we are keen on providing the training and technical support to all promising fashion designers through programs and services that we offer in the incubator.”

Bahrain Fashion Incubator would like to thank all its supporters, especially Tamkeen, which provided a lot of support during the past year and also much appreciation to the Ministry of Industry, Commerce and Tourism and the Economic Development Board for their continued support.