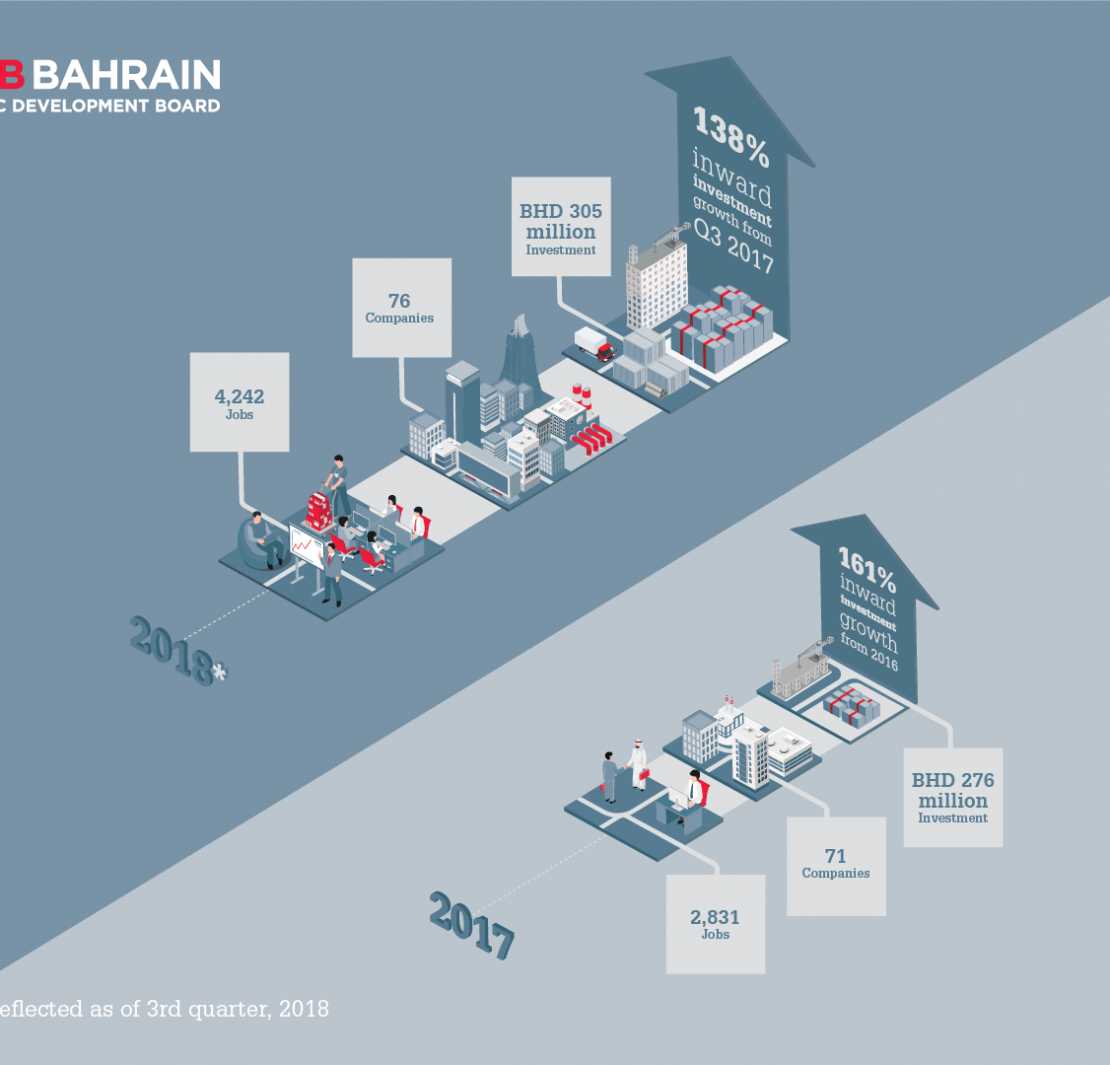 Bahrain EDB has attracted a record number of investment as businesses from around the world continues to look to Bahrain to access the opportunities in the $1.5tn Gulf economy. In the first nine months of 2018, FDI inflows increased by 138% when compared to the same period of last year. This year, Bahrain EDB has already attracted a total of 76 companies, accounting for an investment of BHD305m ($810m), breaking the 2017 record of 71 companies, and a total investment of BHD276m ($733m).

The FDI attracted in the first nine months of 2018 was more than five times of the total attracted in 2015. This strong growth has come in spite of a challenging global environment for FDI, with global FDI flows falling 23% in 2017. Investments in 2018 are expected to generate more than 4,200 jobs over the coming three years, of which more than 1,100 will be high-quality jobs (defined as providing a basic monthly salary of more than $ 1,850).

The investments overall cover all sector focuses with Manufacturing and Logistics accounting for the majority of investment with 31 companies including Ariston Thermo and Mueller (a copper tube manufacturer). As well as, a total of 15 companies were attracted in Tourism, Real Estate, Education & Healthcare, ICT and FS. Some of which include Al Sahel Resort, Flat6labs, Nest, Bank of Jordan, NFT Ventures, and Thales (a specialized aerospace and security company).

Commenting on the news, H.E. Khalid Al Rumaihi, Chief Executive, Bahrain Economic Development Board, said: “We continue to see strong interest towards the GCC opportunity – and our unique Team Bahrain approach provides the means to unlocking these opportunities. The region’s potential is rising with solid investments and a growing number of high-quality jobs for Bahrainis.

“However, while we are excited by this success, we will continue to look towards new initiatives to enhance FDI even further. The Kingdom is introducing a number of key regulatory reforms in the coming months, which will ensure the Kingdom remains competitive and business friendly.”

Among the most prominent developments during 2018 has been the advancement of the FinTech ecosystem, with the launch of Bahrain FinTech Bay, the largest FinTech hub in MENA; the establishment of a $100m Fund of Funds to help fund start-ups across the Middle East; and  a growing interest in the Central Bank of Bahrain’s regulatory sandbox.

Additionally, Site Selection magazine has named Bahrain as the best place to invest in the Middle East and Africa per capita for the third year in a row. It has also named the EDB as one of the Top Investment Promotion Agencies of 2018.

The Kingdom also saw several major announcements earlier this year during the Gateway Gulf Investor Forum, which brought together over 850 global investors and business leaders to explore ways of unlocking the opportunities being created by the economic transformation in the GCC. The event provided a direct route into accessing the GCC market by showcasing major investment-ready projects worth USD $18billion, with projects in the planning phase driving up the value of the project pipeline to USD $26 billion.