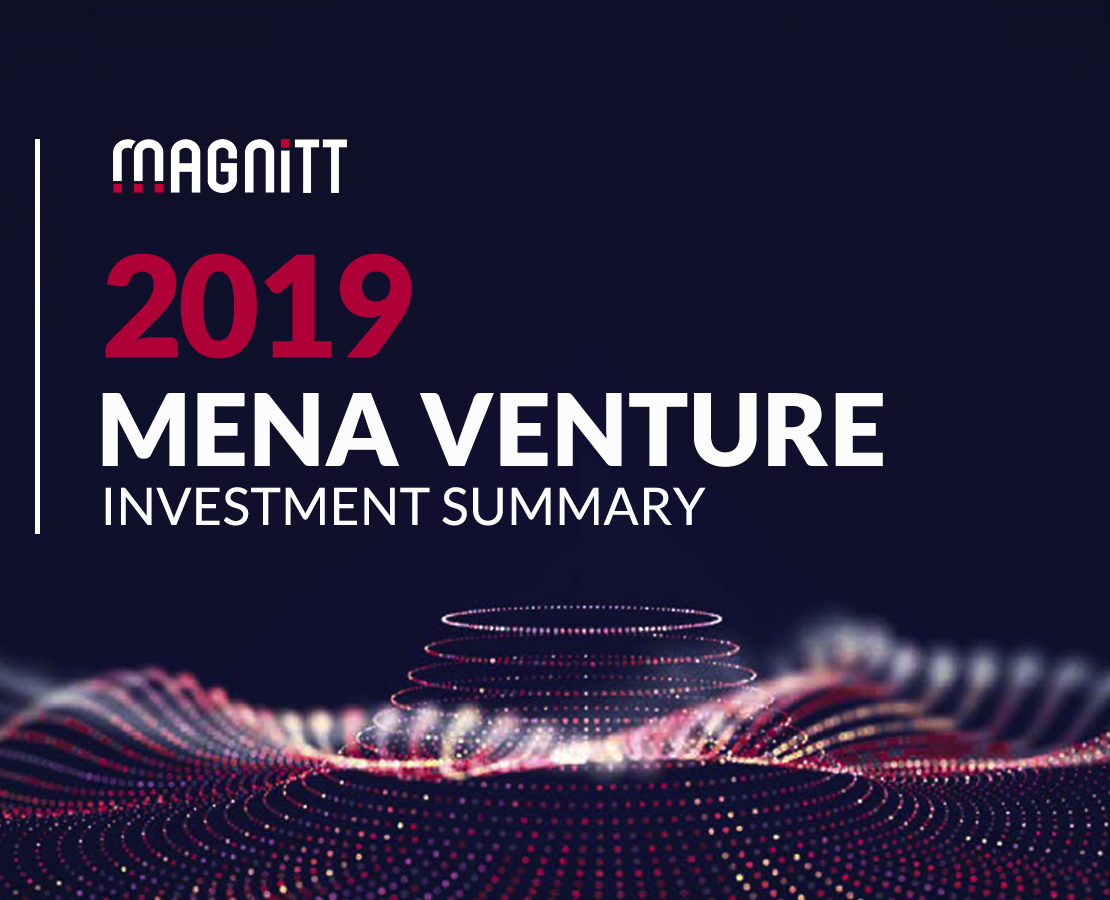 MAGNiTT, a MENA startup data platform, released its flagship 2019 MENA Venture Investment Report this week. The report provides an in-depth analysis of startups and venture capital (VC) investment across the Middle East and North Africa (MENA). 2019 marks a record year for key indicators including number of investments, number of exits, and the total number of investors investing in MENA-based startups.

‘All of these records point towards a maturing ecosystem,’ says Philip Bahoshy, MAGNiTT’s founder & CEO. ‘With exits at an all-time-high, including MENA’s first unicorn exit, the region’s founders, investors, and governments are seeing the returns on their efforts in the tech venture space.’

2. Egypt had the highest number of deals, the UAE saw the majority of funding With its large market size, Egypt has seen a steady increase in the number of investments over the last few years. In 2019, the country surpassed others to rank first by number of deals across MENA for the first time – 25% of all deals.

The UAE maintained its historical dominance as the largest recipient of total funding (60%) thanks to continued government support, corporate venture interest, and growing investor appetite for startups headquartered in the UAE.

However, the landscape continues to evolve and other ecosystems are beginning to emerge. Examples are Saudi Arabia, the fastest growing ecosystem across MENA, which now ranks third in both number of deals and total funding in the region.

3. Record year of exits in 2019, including the first MENA unicorn 2019 saw more exits take place than ever before across MENA at 27. Several industries in the region, including e-commerce & transport, are heavily fragmented, and investors and startups are looking to consolidate.

With Uber’s $3.1B acquisition, Careem became the first unicorn exit in the MENA region. Speaking on the impact of their exit, Magnus Olsson, co-founder and Chief Experience Officer of Careem shared, ‘We hope that our efforts have set the way forward for other tech startups to approach expansion across the greater Middle East, and that our deal with Uber will act as a catalyst for further investment into the ecosystem.’

4. A record of 212 institutions invested in MENA-based startups in 2019 Investor appetite for MENA’s tech startups is growing as the ecosystem matures. Average ticket size is also up by 7% across all deals in 2019. Moreover, 2019 saw the emergence of non-traditional tech investors such as corporates, PEs, family offices and asset managers, which saw a 39% increase from last year.

2019 also saw an increase in international investor participation. In fact, 25% of all entities that invested in MENA-based startups were based outside of the MENA region, marking a new record high.

Moreover, government support was especially evident in the venture capital space, with many governments across the Middle East including KSA, UAE and Bahrain setting up Funds of Funds. Ali AbuKumail, Senior Private Sector Specialist at the World Bank, shares, ‘Many governments in the region have been playing an active role in growing ecosystems conducive to entrepreneurs, including technical and financial support programs and policy reforms – there is a direct correlation between a business-friendly environment and increased entrepreneurial activity.’

5. FinTech remains the most active industry by number of deals Following the shift from e-commerce to FinTech in 2018, FinTech retained its top spot in 2019 and accounted for 13% of all deals. The Delivery & Transport industry, however, accounts for the highest amount of funding of any industry at 19%, as bus transportation startups such as Swvl ($42M) and trucking startups such as TruKKer ($23M) raise sizable funding rounds.

Commenting on the report launch, Bahoshy notes, ‘As the ecosystem is rapidly developing, it is our belief that the availability of accurate and comprehensive data will drive the decisions that shape the future of technology across MENA. We’re excited to share our detailed 2019 MENA Venture Investment report to inform, update, and empower key decision-makers interested in this space. Tech in MENA is booming.’

The MAGNiTT infographic summary is available online to download for free in English and Arabic, with a full 100+ page report available for purchase. The in-depth 2019 MENA Venture Investment Report looks at venture capital investment trends across industries, geographies, business models and stage, while also providing a review and ranking of the investor and exit landscape in 2019.