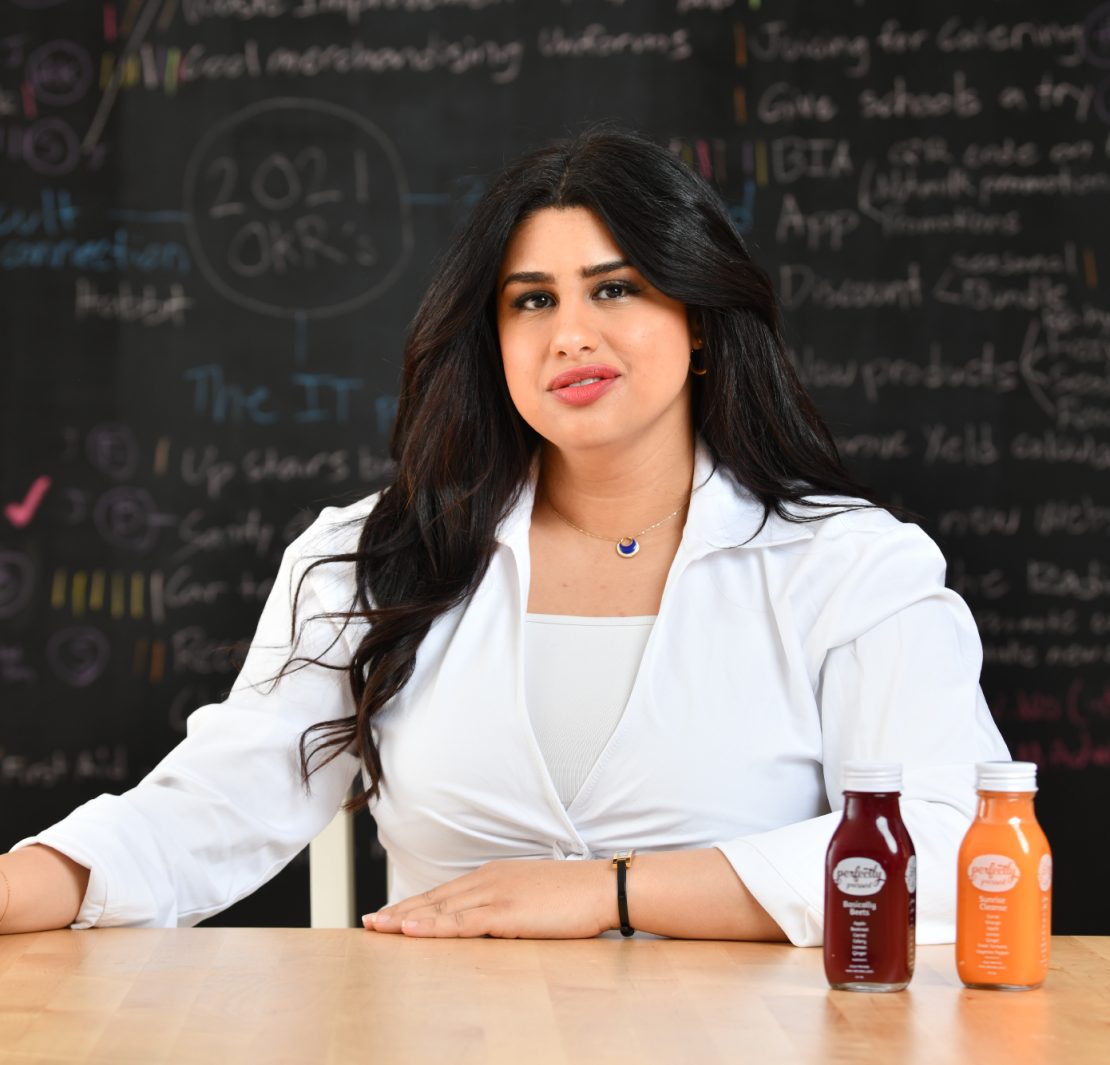 Perfectly Pressed (PP) prides itself as the first manufacturer and distributor of cold pressed juice in Bahrain. The brand name probably already sounds familiar to you if you are an avid wellness product seeker or if you have been looking for delicious juices.

Perfectly Pressed claims to have mastered the art of making perfectly healthy fresh juice and superfood blends that help you build positive change in your life every day.  They call them Functional Beverages.

Yes, that last part is a value they actually incorporate as part of their brand!

The company has come a long way since its launch in 2017, as we’re EXTREMELY excited to be sharing their latest announcement: They’re expanding to Saudi Arabia!

With such big news, we thought it’s only natural for us to have a one-on-chat with Saniya Abdulaal, Co-Founder and CEO at Perfectly Pressed, so she could let us in about the journey that led them to be where they are today, and potentially inspire others to start a journey that’s as successful.

The following is a brief snippet of how the conversation with Saniya went.

The story behind Perfectly Pressed.

Perfectly Pressed was launched in 2017 by co-founders Saniya Abdulaal and Hussain Kadhem. We started by asking Saniya about the story behind the launch and early success of Perfectly Pressed.

“PP started when I began researching natural remedies to solve my personal health issues,” she responded. She went on narrating how she was facing digestion-related issues which prompted her to look for “clean” and easily digestible food to support her body.

Little did she know her daily habit of drinking karak tea could transform her life. She was told this is one beverage she had to quit because of her lactose intolerance. This is when she created the dairy-free alternative with cashew milk.  “cashew karak.” This was the turning point — the genesis of Perfectly Pressed, if you would!

“That’s when I unknowingly created the first flavor and discovered alternative milk and juicing as a means to fuel my body with nutrients and feel better. Since discovering natural functional beverages I’ve found my calling,” Saniya noted.

“From then on it became my life… I have taken countless courses in Asia, America, the Middle East and Europe now in the process of  qualifying in the college of naturopathic medicine as a nutritionist to create more well rounded food & beverage products”

Perfectly Pressed made its debut in a low-key manner after Saniya was done testing the market in previously Market 338, and obtained her license to operate a separate kitchen area at her home. From there, it didn’t take long for both co-founders to scale things up on a massive scale by setting up the first Perfectly Pressed factory in Hidd, Bahrain, an industrial area within the Bahrain Business Incubation Center (BBIC).

By the way, here comes another juicy fact about the company — with Perfectly Pressed, Saniya became the first woman to start operating a factory in fresh foods in Bahrain. From there, it was only a matter of time until she would earn the distinction of being the first Bahraini woman to set up a factory in Saudi. We’re #proud.

What’s so special about Perfectly Pressed?

The primary objective of the company, as outlined by Saniya, is to help their customers conveniently “lead healthier and happier lives.”

It does so by making fresh and balanced juice blends that help you obtain your daily nutrient requirements on the go.

Helping you stay balanced and to maintain optimum health. In some ways, these products are on par with the so-called superfoods given that they provide these essential nutrients quickly and efficiently, which is a key requirement in today’s fast-paced world.

Saniya acknowledged that her background in naturopathic medicine has been a massive advantage for the company’s product development process.

“I ensure that every PP product is natural, fresh, and well balanced; it is aimed to support and improve the function of daily activities based on the drink.”

She elaborated that point by citing the example of beetroot juice (dare we say, it’s actually our favorite!), which is considered an excellent drink that aids the natural body recovery process after rigorous sports. Similarly, Perfectly Pressed’s homegrown, unique health shot blends have benefits for your immune system, skin, and bones.

“In addition to being nutrient-dense drinks that help the body function better, after locking in the nutrients, I taste test them to ensure they taste irresistible. Because part of being healthy is to enjoy naturally delicious drinks,” she added.

We also asked Saniya which of the Kingdom’s organizations were the most helpful in Perfectly Pressed’s journey so far. She was quite candid about it and listed all the entities that promising startups coming out of Bahrain could count on.

The Tale of Saleh Nass, A Bahraini Filmmaker and Storyteller

“UNIDO. When I was in the thinking phase, brainstorming, I did a course here. They helped connect me with successful local, regional and international entrepreneurs to build a strong network in addition to introducing me to the BBIC.”

Saniya then quickly walked us through how the Bahrain Development Bank played a major role in her entrepreneurial journey by granting her the Her Royal Highness Princess Sabeeka Bint Ibrahim Al Khalifa’s fund for women.

And, as you would expect, Tamkeen played a major role as one of the foundational pillars of Bahrain’s entrepreneurial spirit. “Tamkeen supported us in a big way by subsidizing our start-up investment and following this up with continuous support on multiple fronts,” she noted.

Other entities she mentioned and thanked for their contribution to Perfectly Pressed’s success included the Al Osra Supermarket, Entrepreneurs Organization, Bahrain Business Women’s Society, and FoodLab I am so grateful to be working with so many great partners and having the most wonderful team on the island!

“I feel lucky and blessed to be a woman starting a business in Bahrain,” she concluded on a proud note. Bahrain is a great environment for women to thrive in business.

Turns out, her one and only advice for fellow women entrepreneurs and professionals is: There is no such thing as a right moment to start. We agree!

“Your starting point is now. Make sure what you do adds real value to your life and helps improve people’s lives, do everything with love, and never take no for an answer.”

The key to her success, she added, is to find your “why” and then remind yourself of it every day.